This year, the Indiana General Assembly passed SEA 389, which significantly reduced protection for Indiana's remaining wetlands.  It was a blow to all who understand the vital importance of wetlands to water resources and to wildlife, but it was not an endpoint.  There is much we can still do ensure the continuation of Indiana's wetlands.  The Hoosier Environmental Council and Indiana Wildlife Federation are hosting a webinar to review steps we can all take.  Link below to view the recorded webinar.

Dear Friends of Indiana's wetlands,
A federal judge has vacated the Trump Administration's Navigable Waters Protection Rule, the rule that reduced protection for streams and wetlands under the federal Clean Water Act!
The Washington Post reports that this sends us back to the rules of the 1980s rather than going back to the Obama Waters of the US (WOTUS) Rule:
https://www.washingtonpost.com/climate-environment/2021/08/30/water-rule-trump/
It likely means that more of Indiana's wetlands will have federal protection and fewer will be regulated by Indiana's wetlands law, the law that was changed by SB 389 this year.
Here's Reuters coverage:
https://www.reuters.com/world/us/us-judge-vacates-trump-water-rule-environmental-grounds-2021-08-30/
Best regards,
Indra
Indra Frank, MD, MPH
Environmental Health & Water Policy Director
Hoosier Environmental Council
317-292-7311
HECweb.org 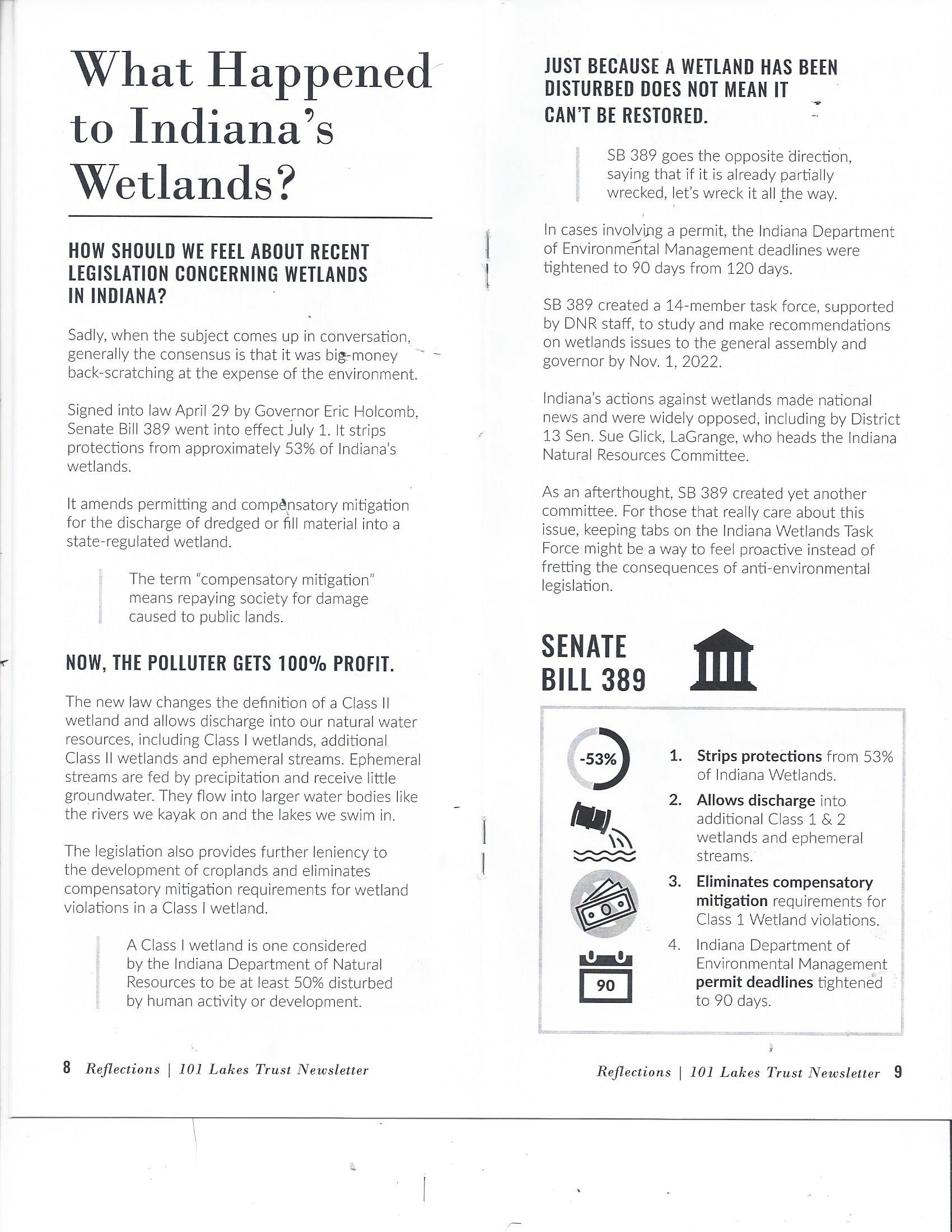 I am writing to thank you for your efforts on behalf of wetlands and to ask you to sign on to a letter urging the Governor to veto the anti-wetlands bill, SEA 389.

First, thank you so much for all of your efforts to defeat the anti-wetlands bill, SB 389.  The many, many calls and emails to legislators made a difference.  Ultimately, we didn't sway enough legislators to get the milder compromise or to defeat the bill, but the massive outpouring of support for Indiana's wetlands meant the bill passed with a narrow margin.  That may set the stage for more changes in the future.  The House and Senate vote sheets are attached so you can see how your legislators voted.  Please thank those that voted 'no'!

Second, the request for a veto.  SB 389 has passed the General Assembly, so it is now Senate Enrolled Act 389 or SEA 389.  It eliminates protection for Class I wetlands and significantly reduces protection for Class II.  Since IDEM estimates Class I and II together make up more than 90% of the state-jurisdictional wetlands, this bill would do substantial damage.  That's why the organizations listed below worked together to draft the attached letter urging Governor Holcomb to veto SEA 389.  We plan to deliver it to the Governor Monday, April 26.

If you would like to send your own message to the Governor, please feel free to borrow material from this letter.  You can contact the Governor as follows:

By mail:  The Honorable Eric Holcomb, Governor of Indiana

The House Environmental Affairs Committee will vote on the anti-wetlands bill (SB 389) Monday, March 29.  Two options have been proposed for revising the bill, Amendment 11 and Amendment 12.  SB 389 would eliminate protection of state-regulated wetlands, and both amendments would drastically reduce their protection.  Determining the best wetland policy for the state deserves a task force where there can be thorough discussion of an array of options among all of the stakeholders.  Please write to Chairman Gutwein (h16@iga.in.gov), Representative Lehman (h79@iga.in.gov), and Speaker Huston (h37@iga.in.gov)

a.) tell them why you feel wetland protection is important

c.) urge them to support a Wetlands Task Force.

House Environmental Affairs Committee met yesterday (March 22) and heard testimony on SB 389 and on potential amendments 11 and 12.  Every person who signed up to testify was heard, though they were limited to three minutes.  14 people spoke against the bill and 5 spoke in favor.  One spoke against the bill but in favor of amendment 12.  There was insufficient time for anyone to discuss the details of how Indiana's current wetland law works, the details of SB 389, the details of the amendments, or what other policy options might be possible.

Amendment 12 to SB 389 is supposed to be a compromise that revises Indiana's wetlands law instead of repealing it, but it would significantly reduce wetland protection.  It enlarges the sizes of wetlands that can be destroyed without a wetland permit and allows destruction of any size of class I or class II wetland within a municipal boundary as long as the owner of the project provides information on the economic and social need for the project and the "lack of reasonable alternative".  There are no provisions to authorize IDEM to deny the application, so Amendment 12 essentially repeals protection for all class I and class II wetlands within a municipal boundary.  As a perceptive person said, "a loophole big enough to drive a herd of bulldozers through".

Amendment 11 would repeal protection for all of the following:  all class I wetlands statewide,  class II wetlands up to 1/2 acre, Class III wetlands up to 1/4 acre, class II and III wetlands inside a municipal boundary up to 1 acre.  It left very few wetlands protected. As another perceptive person said, "a repeal dressed up to look like a revision".

Amendment 11 was written by Senator Garten.  Amendment 12 was negotiated by IDEM and the senate authors of the bill (Senators Messmer and Garten), but IDEM was negotiating under duress.  The threat was SB 389 as it passed the Senate, which is a full repeal of the wetlands law.

The House Environmental Affairs Committee will vote on SB 389 or one of the amendments Monday, March 29.  They have the option of voting to defeat the bill instead of amending it.  They also have the option of creating a task force to examine all of the issues around Indiana's wetlands and what policy would be best going forward.

If you have time, please send your comments on saving Indiana's state-protected wetlands to those listed above, and the members of the House Environmental Affairs Committee: